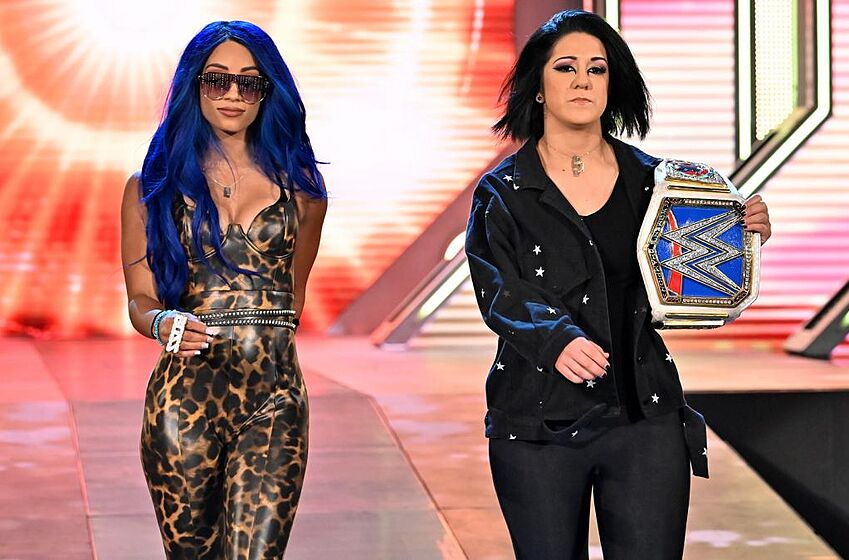 Sasha Banks and Bayley make their way to the ring on the Oct. 25, 2019 edition of WWE Friday Night SmackDown. Photo: WWE.com

Sasha Banks and Bayley are excelling as heels on SmackDown, but if a turn were to occur, the match would be more than worthy of taking place at WWE WrestleMania 36.

Sasha Banks and Bayley have given fans multiple revolutionary matches in WWE. Their classic one on one matchup at NXT Takeover: Brooklyn to their match at WrestleMania 35 for the Women’s tag team championship. Fans know when Banks and Bayley are on the card, they will be entertained.

On SmackDown, The Boss n Hug Connection are succeeding in an antagonists role. The role has been a natural fit for The Boss Sasha Banks. On the other hand, Bayley has improved in her role, but it was not an overnight success.

Bayley wrestled the main event at Survivor Series by engaging in an excited back and forth feud with Becky Lynch and Shayna Bayzler. She did a great job to help Bayzler look stronger in the eyes of WWE fans

Banks is having good matches on SmackDown while adding strength to Bayley’s character turn. When Banks returned from her hiatus, she slid back into her role as The Boss character. The initial challenge was that Banks had been on hiatus from WWE due to burn out and mental health issues. It was difficult to dislike The Boss after the WWE 24 documentary that allowed fans to see the real life issues she was experiencing.

Their tag team has worked due to their chemistry feeling real. Both women have been successful in singles roles as well as a tag team. The idea of them remaining a tag team for a long time sounds great; there is more mileage in their inevitable break up and eventual blow off match at WrestleMania 36.

The common way to think how this feud takes place is that Banks will turn on Bayley to set up a match at WrestleMania 36. Banks has a history of being a more effective villain and Bayley was popular as a fan favorite who appealed to kids.

Bayley’s character turn is still fresh and looking for something to grasp on to in order to become more credible. That can be achieved by Bayley turning on her best friend and becoming a stronger villain at the expense of Sasha Banks. This would tell the story of how Bayley was fed up with the weaker Sasha Banks. Bayley can state how, when Banks left to go on hiatus, Bayley stayed and held down the women’s division. The look of heartbreak on Banks’ face as she watches her best friend mock her issues with mental health will help to elevate Bayley as the most hated woman in WWE.

Fans can latch onto this rivalry because everyone has experienced the heart ache of losing an ex best friend. Bayley as a villain that doesn’t like the fans is a story that has been told countless times by WWE with mixed reviews. Banks’ heartbreak will give Bayley a reason to be disliked by fans. That is something that fans have struggled to believe in, and has hindered Bayley.

This explosion of The Boss n Hug Connection should be a slow build. One of the earlier teases for their break up recently took place on SmackDown. Banks ducked out of the ring when Lacey Evans went to throw a punch. That can begin to angers Bayley because she wouldn’t be weak enough to back down from anyone. This develops over the next few weeks as Bayley begins to view Banks as the weak link.

Banks can begin her character turn back to a fan favorite due to her desire to never give up at the Royal Rumble. All three women’s champions should be sitting at ringside anticipating the winner of the Royal Rumble. Banks surviving until the final four wrestlers is important to this turn. Since Banks has endured through the whole Royal Rumble, the fans are clamoring for her to win the match. Bayley sneaks into the ring and eliminates Banks from of the Royal Rumble. That act will simultaneously break Banks’ heart and the heart of every fan in the building.

The next night Bayley can explain that she used Sasha Banks as a vessel to gain success in WWE. Now that she has achieved success, there is no room for a weak minded individual who goes home when times get hard.

Banks has always provided a great rival to Bayley. In their classic match at NXT Takeover Brooklyn, the fans loved Bayley, they loved Bayley so much because they hated The Boss character. Banks has the opportunity again, but in a different character, to help Bayley become a stronger character.

This feud should come to a head at WrestleMania 36 in a grudge match for for the SmackDown Women’s Championship between the two ex-best friends. This would be the first one on one match that Banks and Bayley have at the biggest show of the year. Bayley can mention how Banks has never won at WrestleMania in her career, and she won’t defeat her this year either.

The match should tell a story of the bully, Bayley, finally receiving her comeuppance by Banks. Banks can overcome all the odds to defeat her ex best friend and to finally gets a win at WrestleMania 36 becoming the new SmackDown Women’s Champion.

If this story is told correctly, Bayley should be the strongest villain in WWE by WrestleMania 36. The signature WrestleMania moment will be Sasha Banks holding up the SmackDown Women’s Championship in the middle of the ring.