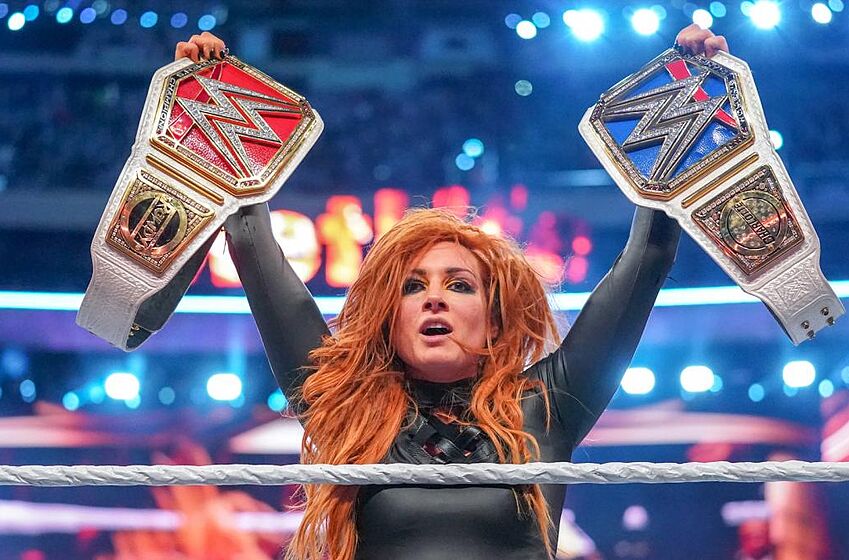 WWE TLC 2019: The Kabuki Warriors must retain the Tag Titles by Raphael Garcia
AEW Hot Takes Of The Week: Moxley to join The Inner Circle? by Dalton Quix

Few would disagree that WWE Superstar Becky Lynch deserves to main event WrestleMania for the second year in a row. Question is does she have the momentum to pull it off?

It would be an understatement to say that 2019 belonged to Becky Lynch. In fact, a strong argument can be made to justify calling her the WWE Superstar of the year.

Continue the momentum of her breakout year in 2018, The Man managed to not only win both the SmackDown and Raw Women’s Championships, but she did so in the same night. And in the main event of WrestleMania, no less!

Although she lost the SmackDown Women’s Championship a month later, the former Champ Champ has managed to hold onto the Raw title for a record setting 247 days and counting. Does she have what it takes to carry that belt into WrestleMania for her second main event slot in a row?

I don’t ask this questioning whether or not she deserves the main event spot, because she most certainly does. She carried the company on her back as its key figurehead for the majority of 2019. She has played apart in countless media appearances and even more countless matches between TV tapings, PPV events and house shows.

When you list off names who have main evented consecutive WrestleMania shows (i.e. Stone Cold, The Rock, John Cena, Roman Reigns, etc.), there is no reason why Becky Lynch doesn’t deserve to hear her name uttered in the same vain as these men. In fact, her name would not look out of place at all mentioned next to such prestigious current and future Hall of Famers.

Beyond that, she also – at one point – managed to be WWE’s top merchandise seller this year (per a scoop from Sean Ross Sapp, as reported by Blake Oestriecher on Forbes).

In theory, every Mania main event should be occupied by the top stars (ideally, top babyface and top heel) who stood out more than anyone else in the eyes of the fans who helped them get over. Lynch checks the box off nicely, so an argument can be made for why she deserves the spot in 2020.

It’s trying to determine if she can really pull it off that’s the tricky part.

Lynch has some stiff competition in regards to who else could occupy the main event instead of her. If Lynch was the top babyface of the year, then the top heel was Bray Wyatt’s Fiend, who just so happens to have overtaken Lynch’s spot as the new number one merch seller, according to The Wrestling Observer Newsletter (per a WrestlingInc report).

And since intergender wrestling isn’t really a thing in WWE, we shouldn’t expect Becky Lynch vs. The Fiend at WrestleMania. The alternative would have to be The Fiend defending his Universal Championship in the main event, rather than Becky Lynch defending her Raw Women’s Championship.

However, hope is not lost for WrestleMANia II just yet.

Becky Lynch’s WrestleMania main event spot, at this point, will be determined by who WWE has penciled in for her to face on The Grandest Stage of Them All.

Next: WWE Hall of Fame 2020: 8 more wrestlers we’d like to see inducted

I’m not going to turn this into a fantasy list naming which competitors should face Lynch for the title (although it’s worth noting that Shayna Baszler is a strong possibility, given recent storylines).

What I will say is that excitement is built by what a match looks like on a cue card combined with how WWE manage to build the story up on the road to Mania. So if WWE offers a storyline between Lynch and someone who’d make the Mania main event truly feel like the main event, then we’ll be on our way getting the second women’s main event ever.