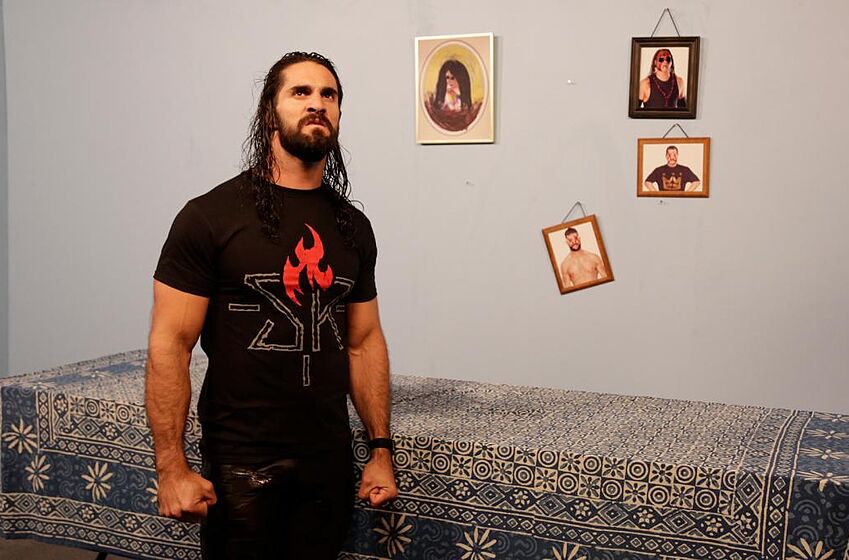 Seth Rollins has been at the top of WWE since WrestleMania, but fans have soured and the former champion is now in danger of receiving “go away heat.”

Ever since he beat Brock Lesnar for the WWE Universal Championship at WrestleMania 35, Seth Rollins has been planted firmly at the top of the food chain on Monday Night Raw. His title win over ‘The Beast Incarnate’, which opened the main card of WWE WrestleMania 35 to the surprise of almost everyone, was a massive deal and cemented Rollins as the company’s undisputed ‘Top Guy’; their number one babyface on their number one brand (at the time, at least).

Lesnar regained the Universal Championship after becoming Mr. Money in the Bank, though, and by the time Seth’s second crowning as Universal Champion in the space of a few months rolled around at WWE SummerSlam, the atmosphere was decidedly different.

In the second half of 2019, Seth Rollins’ worst enemy has comfortably been Seth Rollins. His Twitter account, in particular, has been a source of regular fan anger towards The Architect; in July he decided to try to win a war of words with New Japan Pro Wrestling superstar Will Ospreay by  first being as patronizing as humanly possible, then when that didn’t work, claiming his bank account usurping Ospreay’s was the deciding factor in who was the better of the two. Unsurprisingly enough, this went down like a lead balloon with the majority of WWE fans, and since then, Rollins’ stock hasn’t really recovered at all.

When he hasn’t been taking shots at Will Ospreay, Rollins has spent a lot of his time on Twitter bizarrely preoccupied with nascent wrestling promotion All Elite Wrestling. Rollins took the time to go after Jon Moxley, claiming the former Dean Ambrose “took his ball and went home”, and was “trying to take food off [his] table”. Considering a month beforehand Rollins was openly bragging about the size of his bank account, fans understandably reacted badly to this sudden, almost woe-is-me change of pace.

It hasn’t helped Seth’s predicament that, in the months following Summerslam, the quality of his booking has veered anywhere between “bang average” and “so pathetic you’d swear they were trying to bury him if you didn’t know better”. After regaining the Universal Championship, Rollins immediately dived into a prolonged feud with Baron Corbin, who is, depending on your outlook, either the company’s most underappreciated heel, or a complete heat vacuum.

This feud went on forever and even threatened to cool off Becky Lynch by proxy, after she and Lacey Evans were drafted in to add some spark to the feud. What they managed was to make Rollins and Lynch look, not like badasses running their respective divisions, but annoying lovestruck teenagers. Rollins’ next major feud after the Corbin debacle was crucial.

The next feud of note came courtesy of Bray Wyatt, and his completely revamped gimmick, but in particular the monstrous murder clown known as The Fiend. Wyatt had been hot-shotted into the Universal Title picture to capitalize on his immediate, white-hot popularity. Wyatt was easily the hottest character on WWE programming, and despite everything, the time seemed right for Seth to drop the belt and rebuild.

After weeks of Rollins being booked unbelievably weakly, at one point literally cowering in the corner of the ring making terrified screaming noises, the two finally met in a title match at Hell in a Cell, and Rollins retained via referee stoppage, to the absolute outrage of the live audience, and to WWE fans worldwide.

The aura of ‘The Fiend’ had been badly damaged in his first match of any real consequence, and Seth Rollins was caught in the crossfire. He would eventually lose the title to The Fiend at Crown Jewel, but by then, the damage had been done, both to The Fiend’s aura and to Seth Rollins’ babyface run.

Since losing the Universal Championship, Seth Rollins’ popularity has continued to nosedive. During a recent taping of Monday Night Raw in Manchester, England, Rollins was absolutely crucified by the live crowd; the reception he received was so full of hatred and vitriol that, according to multiple accounts from people at the tapings, WWE went back and edited the crowd’s reaction to him significantly, drastically muting the boos Rollins was on the receiving end of.

Seth Rollins is supposed to be Raw‘s top babyface, and this isn’t a good position for him to be in at all. The reactions that Rollins is beginning to suffer regularly are starting to become directly comparable to those that fans would aim at Roman Reigns during the height of his never-ending push, with ‘The Big Dog’ routinely booed out of whichever building he was in that week, despite being booked as WWE’s top babyface.

There are earlier precedents for this sort of thing happening, too. For instance, during the first couple of years of his main roster push, John Cena would regularly receive the loudest negative reactions of the night; these days the “John Cena sucks!” chants are mostly ironic and a show of endearment, whereas for a couple of years in 2006/2007, they were absolutely sincere.

Going back even further, even now-world-megastar The Rock wasn’t safe; his original run as Rocky Maivia was despised by the then WWF fans, to the point that he was on the receiving end of multiple chants of “die, Rocky, die” during matches. Not German for “the Rocky, the”, either.

These levels of negative crowd reactions are rare and desperately unwanted. Despite themselves, WWE fans will almost always get behind the babyfaces they’re presented; even if the reactions aren’t deafening they at least politely applaud. Multiple crowds regularly turning on a supposed top babyface in the manner that crowds are starting to turn on Seth Rollins is the result of fans who are being presented with both someone they have reason to dislike as a real person, and someone who has been booked atrociously but is still expected to be taken seriously as a ‘Top Guy’.

The solution to these woes isn’t immediately obvious, and that’s a major problem. In Roman Reigns’ case, the crowd didn’t have a problem with the man himself, so when WWE stopped booking him as an invincible superman, negative reactions slowly died down, and he’s now organically over as a babyface. In Rocky Maivia’s case, the heel turn that birthed The Rock was the greatest solution the company could have possibly come up with. For John Cena, although it took a long time, eventually the company’s booking started to calm down slightly, and Cena’s tireless work with the Make A Wish foundation slowly won him over in fans eyes.

Things are different in Seth Rollins’ case. The heat he’s getting is dangerously close to crossing over from Reigns-style “we dislike this booking” booing and into noticeable ‘go away heat’; originally christened ‘X-Pac heat’ in dubious honor of the man behind the gimmick, Sean Waltman, who was booed loudly by fans not because they disliked the X-Pac character, but because they vehemently disliked Sean Waltman himself.

In the case of Rollins, a victim of atrocious booking he may be, but he’s also a victim of himself. His habit of displaying himself on social media as arrogant and rude has soured him in the eyes of a lot of the WWE fanbase; the solution therefore seems to simply be “turn him heel then”, but we’ve already seen Seth Rollins as the company’s top heel.

The heel turn won’t provide anything new, fresh and exciting like it did when Rocky Maivia became The Rock; Seth Rollins turning heel again to cover for his own real-life persona will only really serve to cement what, if social media is any indicator, increasing numbers of fans are starting to think: “Huh… That Seth Rollins guy is a bit of a ****, isn’t he?”

I don’t really know what WWE can do to salvage Seth Rollins from here. He’s a tremendously talented wrestler with a lot still to offer the company and the business, so I hope they manage it. Quite how they save him, though, right now, is a mystery. Good luck, Seth. You’ll need it.